Love Island is no stranger to a cliff-hanger, but last night’s episode saw the biggest twist so far in its seventh season. In fact, we’re not sure we’ve seen a twist this big since Georgia Steel (aka “I’m loyal”) and Sam Bird chose to split up and stay in the villa, rather than ride off into the sunset together. Yep, you’re going to want to know how to watch Love Island online and stream tonight’s episode as another islander is dumped from the island. Keep reading to find out how and where you can get a 100% free stream.

So far we’ve seen three islanders dumped from the island and have their search for love cut short, and tonight we’re about to see one (maybe two) head for the departures lounge.

It wouldn’t be Love Island without putting a gigantic spanner in the works, though, now would it? A foreboding chime went through the villa and Faye revealed Brad and Lucinda must decide between them which half of the couple will be leaving the villa, and who will be staying, well and truly bursting this particular sanitized sex bubble. This comes just hours after the couples first date. Savage.

With the smell of the next dumpee in the air, here’s how to watch Love Island UK 2021 for free below.

How to watch Love Island online in the UK

Love Island is back on tonight on ITV 2 with another islander dumping. Catch the all- new episode at 9pm BST, with new episodes  airing every Monday-Friday and Sunday night at the same time. On Saturday at 9pm BST, catch Love Island: Unseen Bits for an extra slice of summer romancing.

As it’s ITV, anyone located in the UK can tune in for FREE – you’ll just need to be in possession of a valid UK TV license, of course. As well as tuning into ITV 2, this of course also means you can watch Love Island via the ITV Hub.

How to watch Love Island outside the UK

Don’t get mugged off by geo-restrictions, which restricts certain services and content to specific parts of the world. You can get around geo-blocks by using a VPN, or Virtual Private Network. It’s completely legal, very affordable and easy to use – and it also encrypts your browsing, offering protection against cybercriminals and government snooping.

Use a VPN to watch Love Island from anywhere

3. Go to the broadcaster’s stream – head to ITV Hub and start watching Love Island as if you were back at home

How to watch Love Island UK 2021 online in the US

For fans in the US, it has been announced season 7 of Love Island UK would premiere on Hulu on Monday, July 12.

Hulu will drop new episodes daily, allowing those Stateside to experience Love Island UK much the same way as in ol’ Blighty, just a few weeks behind.

Depending on which plan you opt for, you can make the most of a Hulu free trial of either 30 days or 7 days. Thereafter the Hulu price starts from $5.99 a month.

Everything you need to know about Love Island 2021

Where is Love Island 2021 being filmed?

Completely missing out on our dose of Vitamin D and the Love Island summer class of 2020, we’re long overdue beach frolics and outrageous dates. That being said, with the pandemic still trying to rain on everyone’s parade, many questioned what health and safety precautions would be in place.

However, Love Island 2021 is being filmed at its usual location at the Love Island villa in Majorca, though there were reports it had a backup location in Jersey if the Covid-19 situation in any way hindered travel.

It has also been reported a large proportion of production will take place in London rather than Majorca, including Iain Stirling’s voice over. Gutted. Much of the show’s other safety precautions will take place behind the scenes, with little to know obvious changes on screen.

What safe-guarding has been put in place for Love Island?

Aside from the obvious elephant in the room (that pesky pandemic), Love Island has had other pressing matters to deal with.

In recent years it has come under fire for its lack of safe-guarding of its contestants in preparing them for the barrage of fame and ridicule after appearing on the TV show. With the loss of Sophie Gradon in 2018 and Mike Thalassitis in 2019, both to suicide, there has been pressure for Love Island to do more.

This year, a duty of care protocol has been introduced in order to look after the mental health of contestants and better prepare them for live after the reality show. These measures also include support before and during filming.

Thu Jul 15 , 2021
Yesterday, SEIU Nearby 105’s bargaining group started their initial working day of negotiations with several Denver cleaning contractors to push for improved wages and performing conditions for janitors. In the meantime, various dozen janitors congregated at SEIU Community 105’s place of work in a demonstrate of support for their negotiators. […] 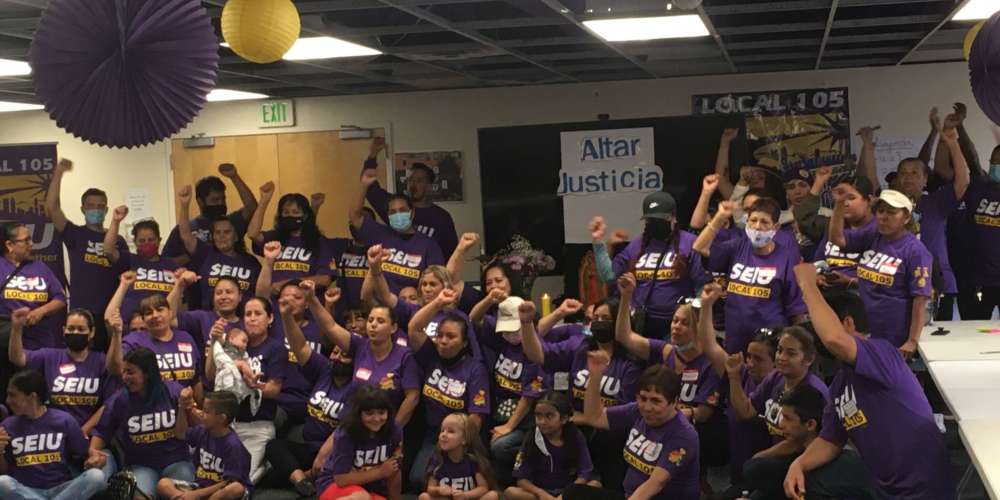